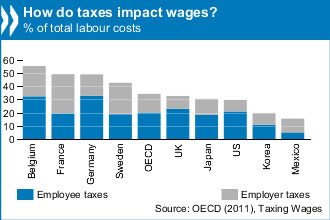 Tax: the average tax burden on earnings in OECD countries continues to rise

The average tax and social security burden on employment incomes increased in 26 out of 34 OECD countries in 2011 according to the new OECD Taxing Wages publication.

In most countries the higher overall tax burden was due to personal income tax, rather than increased Social Security Contributions. Only 5 countries raised their statutory tax rates on average earnings. In most cases the rise in the tax burden was due to a higher proportion of earnings being subject to tax because the value of tax free allowances and tax credits fell relative to earnings. In a few countries including the Czech Republic, Hungary and Ireland they were actually reduced in nominal terms.

Taxing Wages provides nationally comparative details about the taxation of employment incomes and the associated costs to employers for different household types and at different earnings levels. These are the key factors in determining the incentives both for individuals to seek work and for businesses to hire workers.

The tax burden is measured by the ‘tax wedge as a percentage of total labour costs’ – or the total taxes paid by employees and employers, minus family benefits received, divided by the total labour costs of the employer. Taxing Wages also breaks down the tax burden between personal income taxes (PIT), including tax credits, and employee and employer Social Security Contributions (SSC)
Key Taxing Wages results in 2011 included:

The highest tax wedges for single workers without children who are earning the average wage in their country were observed in Belgium (55.5%), Germany (49.8%) and Hungary and France (49.4%). The lowest tax wedges on the same basis were in Chile (7%), Mexico (16.2%) and New Zealand (15.9%) The average for OECD countries was 35.3%. (See Table 1)
The average overall tax wedge, for those earning the average wage, increased by 0.3 percentage points between 2010 and 2011. This was largely due to PIT. Of the 26 countries where the tax wedge rose, in 18 the PIT wedge also rose, most notably in Ireland (+3.8 percentage points), Hungary (+2.4 percentage points) and Portugal (+1.4 percentage points). Falls in the overall tax burden were also primarily due to PIT changes – the largest decrease was in New Zealand where the tax wedge fell by 1.1 percentage points due to changes in the income tax rates in 2011.
The United States was the main exception to the rule. The overall tax wedge fell by 0.9 percentage points in 2011, due to a decrease in employee social security contributions which outweighed an increase in income taxes resulting from the expiry of the temporary “Making Work Pay” non-wastable tax credit.
The highest tax wedges for one-earner families with two children at the average wage were 42.3% for France, 40.3% for Belgium and 38.6% for Italy. New Zealand had the smallest tax wedge for these families (-1.2%), followed by Chile (7%), Ireland (7.1%) and Switzerland (8.4%). The average for OECD countries was 25.4%.(See Table 2).
Single people in Hungary faced the biggest increase in the tax burden, but families with children enjoyed the biggest reduction due to a reform of the child tax relief scheme that changed from a tax credit to a more advantageous tax allowance in 2011.
In all OECD countries except Mexico and Chile, the tax wedge for families with children is lower than that for single individuals without children. The differences are particularly large in the Czech Republic, Luxembourg, Belgium, Germany, Hungary, Ireland, New Zealand and Slovenia.
Taxing Wages 2011 includes a special feature that analyses trends over time in statutory PIT and employee SSC rates, the income thresholds where they apply, and other statutory provisions that shape average and marginal personal tax rates in OECD countries.

The most pronounced trend has been the reduction in top statutory PIT rates, inclusive of surtaxes and sub-central income taxes. The average OECD-wide top statutory PIT rate decreased significantly in each of the last three decades, from 65.7% in 1980 to 46.5% in 2000, and to 41.7% in 2010. More recently, this trend appears to have come to a halt – , in 2010 and 2011 more countries increased than reduced their top PIT rates.

The PIT for top wage earners fell in 2011, but these cuts were partly offset by employee SSC increases. On average the top “all-in” rate across the OECD fell by 4 percentage points, from 49.4% in 2000 to 45.4% in 2010, compared with the 4.8% reduction in the average top statutory PIT rate.

Over the last decade, almost two-thirds of OECD countries have reduced the income threshold at which the top statutory PIT rate starts to apply, though in the majority it is still more than twice the average wage. For people earning average wages, the statutory PIT rate fell across the OECD from an average 30.5% in 2000 to 27.4% in 2010, with the corresponding average personal income tax rate falling from 16% to 14.5%. For low income earners there were no clear trends in the level of income at which an individual starts to have to pay tax, or in the starting rate of tax.

In some countries a range of insurance-related benefits are provided not through SSCs to government but through compulsory payments to privately-managed pension funds or insurance companies. These countries include Australia, Chile, Iceland, Israel, Italy, Mexico, the Netherlands, Poland, the Slovak Republic and Switzerland. More information on these “non-tax compulsory payments” is included in the OECD Tax Database NTCP figures 2011.

“EXTENSION FOR THE ADDITIONAL CONSIGNMENT NOTE”